I’ve seen a selection of recurring markings on pencils, but one that always interested me was the ‘S [Crown] O‘ stamping on a number of older, (mainly) British pencils. If you collect older pencils you’ve almost certainly come across it before. The stamp tends to sit alongside a code, for example, ’48-75’ on the pencil below (which in case you’re interested, is a Made in England, Venus Pencil Co. Limited, HB).

In a nut shell, if you see this stamp, then the pencil was procured by Her Majesty’s Stationery Office (“HMSO“) and then sent out to one of nearly a dozen Government departments for general use.

The history of HMSO is, in many ways, a history of Britain for the same period. So as helpful as a little bit of background might be, i’m going to avoid getting lost in the long grass and only provide the smallest amount.

As one would imagine, running an Empire was a seriously bureaucratic business, and with bureaucracy comes expense. In this case, a huge expense. The Government of the day started asking questions about public expense (particularly for paper production) and so it was decided that this expenditure needed to be accountable in some way. To try and get a grip on this, HMSO was formed. HMSO went on to print numerous items for various Government departments including copies of Hansard, Wartime ration books, and the Official Highway Code.

If, like me, you find this kind of thing interesting, then I would recommend you take a look at ‘Her Majesty’s Stationery Office – The Story Of The First 200 years, 1786 – 1986‘ by Hugh Barty-King (ISBN 0 11 701304 8). It was commissioned by HMSO to mark the Bicentenary Year and whilst it is not all about pencils (or in fact, about pencils at all), it’s still a seriously interesting read.

Anyways, back to pencils…

The George Rowney advert above (11 May 1850) is not unlike adverts for other makers at the time. The HMSO contract was a bit of a ‘badge of honour’ and a sign that the pencil had a certain amount of quality to it. This wasn’t entirely accurate however, as HMSO was always on the look out for a good deal, and this doesn’t always go hand-in-hand with a quality product.

Luckily, all the examples I have are good quality items, even when they are simple design such as the examples below. These pencils are a combination of wartime era pencils which were stripped of their paint jobs and some very early examples which never intended on having a paint job in the first place.

Note the various “British make”, “Made in England”, “Made in Gt Britain”.

All sources point to the “British Make” being the earliest.

I’m not certain of the makers, but if I had to guess, id say a very early Wolff or Cohen for #1, Chambers for #2 & #4, and maybe an old Eagle for #3 (although this one is a serious punt and i’m just basing this on the quality of the stamping on the pencil, compared to that on a similarly aged, natural round Eagle).

Supplying a government should be both lucrative and secure, and so it would appear that nearly every major British pencil manufacturer was keen to get in on the action. It doesn’t look like HMSO operated with a single supplier at a single point in time and so you will get pencils of the same age all with the HMSO stamping.

Jump forward 80 years or so (11 May 1861 to be exact) and questions are still being asked of the expense. This time, the papers want to know how on earth HMSO can spend so much money on simple stationery items (hint – they ordered, and made, a seriously, seriously large amount). The reporter has used some particularly poetic language in the clipping below:

I’ve mentioned in earlier posts that British pencil manufacturers were suffering from the German & Austrian competition around this time. Unsurprisingly, the MP’s representing constituencies with pencil manufacturing industries, raised this issue in the Commons. As the article from 18 March 1891 below shows, the proceedings are quite cordial at this stage, but things get a little more heated as we progress.

This article provides an interesting addition in the very last sentence. Some pencils in my collection also have the stamping “V [crown] R”. It appears that this was another way to show that the pencils had been made for a Government body or department.

In case you didn’t know, ‘V.R.’ is short for Victoria Regina, and so any pencil with this mark (such as the rather excellent square leaded L & C Hardtmuth example below), can be dated to within the reign of Queen Victoria, i.e. 20 June 1837 to 22 January 1901. 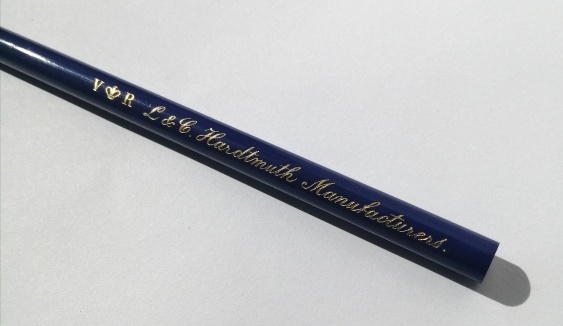 In March 1893 the question of German pencils was once again raised in the Commons. There were lots of Bavarian pencil makers around this time, however a later entry within Hansard provides a bit more detail on how Bavarian pencil makers made it into Government contracts (see – HC Deb 22 June 1896 vol 41 c1553).

Responding to this question, Mr Robert Hanbury MP noted that foreign firms having London houses are not contractors outside the United Kingdom, and the two German firms who supplied these pencils were in fact in that position. 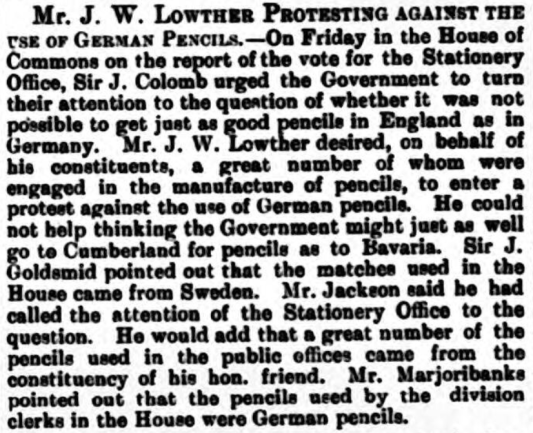 Hanbury MP went on to say that there was no obligation to continue to give orders to these two firms. The likelihood is that the two Bavarian makers referred to are Johann Faber and A.W. Faber. Both had offices in London at this time as they set up in advance of attending the Great Exhibition of 1851.

By November 1902, the pressure had continued to mount and the Northern Whig noted that most pencils procured by the Stationery Office were English made.

Interesting that the Cumberland has no Stationery Office code and also that it’s a lefty. I’ve noticed older pencils tended to have their lettering left-to-right, but in this case I can’t be certain that it pre-dates the right-to-left Rowney above it in the picture.

All this being said, L & C Hardtmuth, being Austrian and with an office in London, proudly continued to make pencils for HMSO, as the below article from the London Evening Standard in May 1909 shows

Unfortunately, L & C Hardtmuth were soon to fall foul of a whole selection of war-related issues. My next few posts will track this as we look at their progression from setting up an office on Golden Lane, London, EC2, through to the creation of a factory in Croydon.