In 1937 Staedtler had their 275th anniversary, and with that, they released a range of ‘275 years’ branded pencils across the range.  They also produced a 275 years anniversary book, which you can still pick up from specialist book sellers (although its published in German in case that matters).

I don’t really have much history other than that to go with these pencils, so this post is really just a bit of a ‘gallery’ showing a number of items in my collection.  I don’t have every example of the 275 anniversary pencil, so if you have others I don’t, I’d be very keen to talk trades. Anyways, enjoy!

The 1937 edition of the Staedtler catalogue featured an anniversary cover. 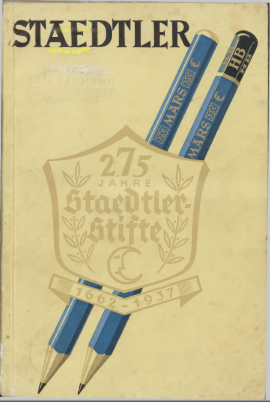 1937 cardboard box – note the ‘Bleistifte’ branding which featured on the graphite releases.

1937 cardboard box – note the ‘Kopierstifte’ branding which featured on the various grades of copier as well as the coloured copier releases.

Tin version.  I have a set of 275 anniversary HBs that came in this tin.  Note the ‘J.S.Staedtler’ branding instead.

Interior paper insert for the cardboard boxes.  Lovely interior gold stamping as well.  Note that regardless of the exterior branding, the inserts use the ‘J.S.Staedtler’ branding.

Additional paper guarantee certificate that comes with the copiers.

Additional paper guarantee certificate that comes with the graphite grades.

Rear of both examples of the guarantee certificate which sets out information on the range and their uses. 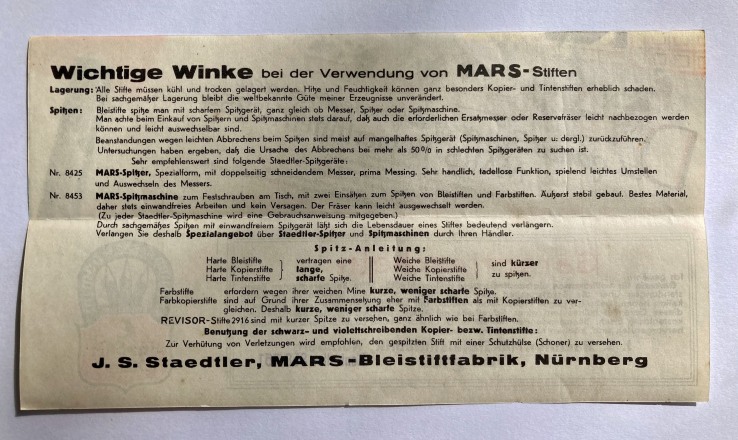 275 anniversary branded copier in box.  754 is the ‘hard’ grade for copiers.  Also available in weiche/soft, but it doesn’t look like they made a mittel/medium anniversary pencil.  Picture shows two sides of the round pencil.

Colour copiers with the 275 anniversary branding.  Nice that they opted to put the branding across the range.

Other side of the colour copiers.

2886 Mars Lumograph B grade with 275 anniversary stamping.  Note the factory sharpening and Bavaria stamp.  Includes American and British patents, so likely to have been for the export market.

2886 Mars Lumograph B grade with 275 anniversary stamping.  Unsharpened and Bavaria stamp with patents.

2886 Mars Lumograph 3B grade with 275 anniversary stamping.  Unsharpened, ‘Made in Germany’ stamp, with patents.