This is the first part of a 6 part series.  I will amend this page once they are all up to have a landing point for each part (over the next day or two).

I remember when I started getting interested in pencils as more than just things to write with, I was fascinated by the idea of a ‘War Drawing’ pencil. It didn’t take much research back then to get the general idea: supplies such as metal, rubber and paint were needed elsewhere, so they were removed from pencils.

Anytime I see this type of pencil brought up in online conversations, this is usually the extent of the explanation given for their existence. And whilst it is, in may ways, completely accurate, it doesn’t tell the whole story.  This post is an attempt to put a bit more meat on the bones. Oh, and in case you hadn’t already worked it out, the war in question is WWII, not WWI.

There are actually two main ‘styles’ of pencil to talk about here; first is the ‘War Drawing‘ and second is the ‘Utility’.  They go hand in hand and so there really is little point in splitting them into two different posts. Further, most of the British makers produced both Utility and War Drawing versions, so I don’t plan on focusing on a single maker for this post.  This post also touches briefly on colouring and copying pencils of the period too.

There is going to be quite a lot of legislation to look at within this post.  I could have cut it down, but there are a couple of reasons I have elected not to:  Firstly, in order to actually understand these pencils properly, we actually do need to look at the legislation in a bit of detail.  Secondly, many of the pieces of legislation within this post are not available online anywhere else.  They are, quite unsurprisingly, pretty niche documents and the normal resources just never got around to digitising them.

Further, even in hard copy, they are only available in a couple of places in the world, all of which are almost certainly all in London (I can think of two and I have easier access to one).  I’m therefore putting a lot of the information up within this post so people can have access to it. A lot of the information presented within this series of posts took an awful long time to track down, so I hope it provides for an interesting read!

As one would imagine, there was a lot of legislation being produced during wartime, much of which was due to lessons learned from WWI, others which were simply reactive measures to what the Government was seeing unfold.  The first piece we need to look at is the Finance (No.2) Act 1940, of which I have prepared an abridged version below.

A year after the outbreak of WWII, it was decided to introduce a levy on luxury goods; the idea being that this inflation would dissuade the public from purchasing certain items and allow the raw materials to be diverted for use in the factories where war related items were being manufactured.

The Finance (No. 2) Act 1940 set out that a Purchase Tax should be payable on, inter alia, pencils and other stationery goods:

I’ve found that a really good source of information is to check Hansard for the discussions and debates that were taking place in Parliament as the various bills, orders, etc. worked their way through the system. 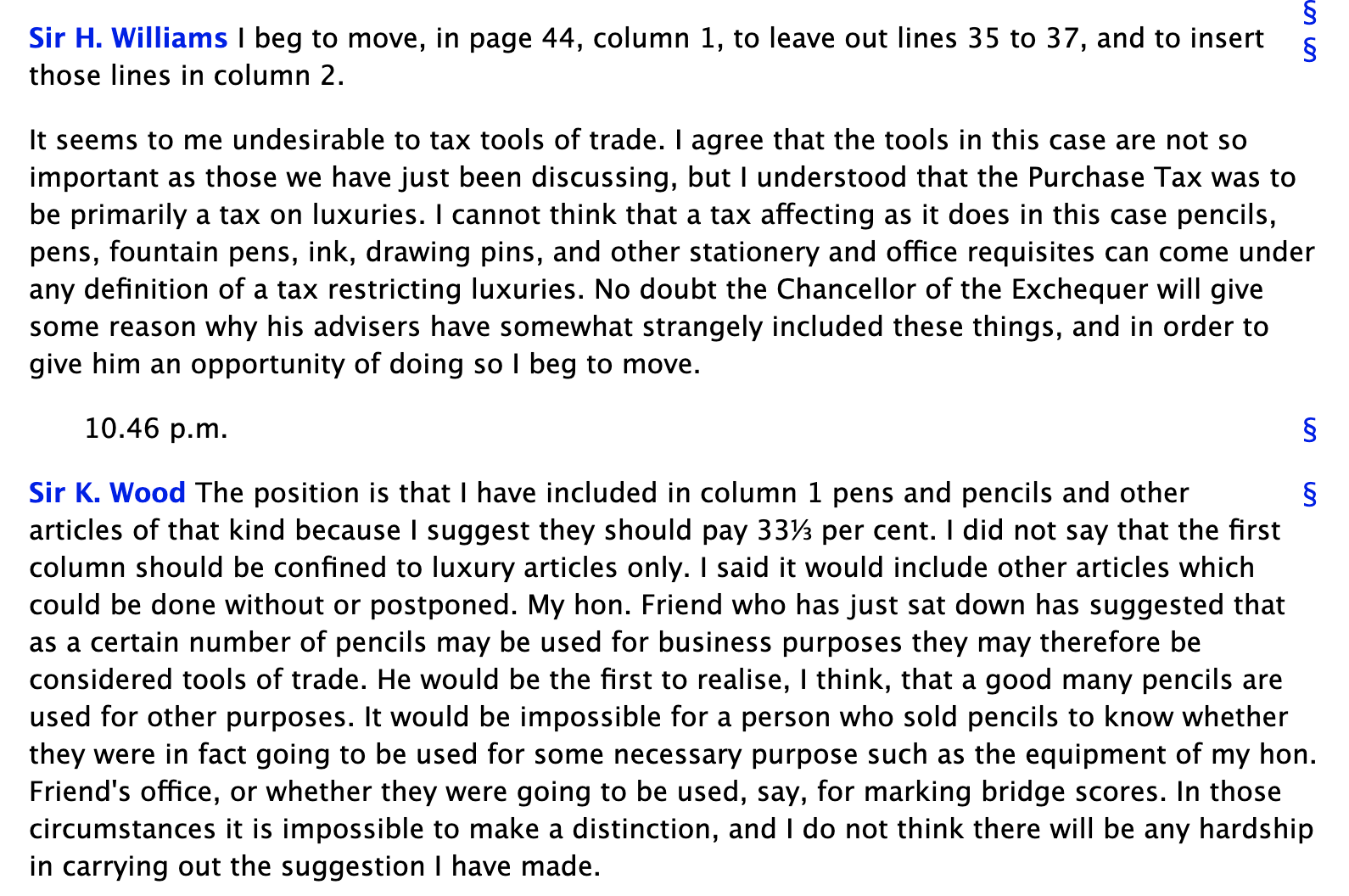 We need to park Purchase Tax on pencils for a moment, but keep it in your mind as it will pop back up shortly.

By 1941 many items were rationed owing to the need to produce war essentials for the expanding armed services . Further, certain raw materials could no longer be imported, and those that could be were directed towards the war effort. Non-rationed items saw their price surge, therefore, the Government introduced ‘Limitation of Supply’ Orders which forced manufacturers to produce a fraction of their pre-war amounts.

The Pencils (Control of Manufacture and Supply) Order, 1942, set strict rules on what pencil manufacturers could produce: 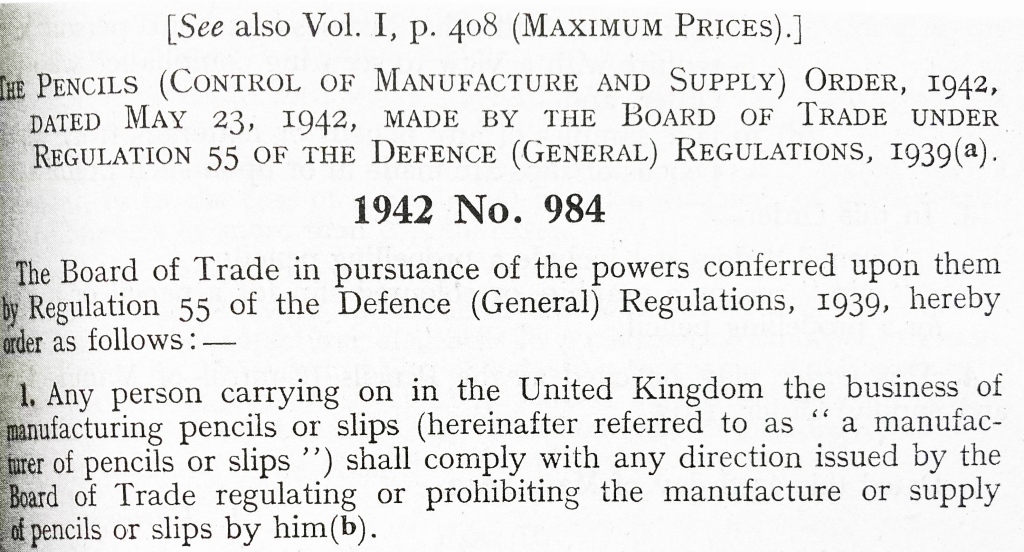 Looking at this first excerpt above brings up an interesting point.  These rules only applied to companies within the United Kingdom, therefore, there would be nothing to stop, for example, a neutral or allied country from shipping pencils into the UK in whatever form they liked.  Saying that, and rather unsurprisingly, I’ve not seen any examples of this. Of course, many of the big pencil manufacturers were based in Germany and so all imports from there ceased.

Under The Trading with the Enemy Act 1939, it was a crime to do so, and so any of the agents for the big German pencil makers will have parked any dealings during this period.

I’ve set out a couple of interesting sections from the Trading with the Enemy Act 1939 below to provide some context:

When we look at the list of possible directions the Board of Trade was setting out they could produce, it seems quite clear that there was going to be heavy regulation on the horizon: 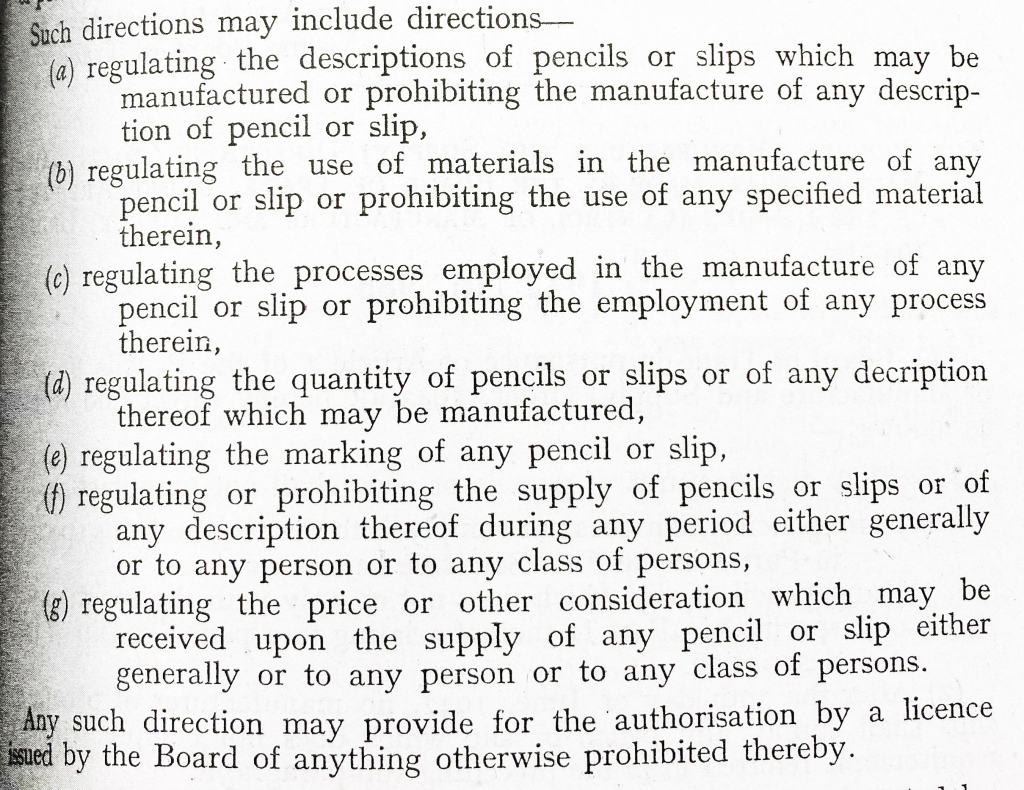 The Board of Trade use Section 2 to remind manufacturers that this isn’t a bluff and that they will be watching.  Manufacturers would need to keep detailed records of their business dealings or run the risk of serious fines (or worse).

You will note that Section 3 expressly excludes propelling pencils.  This was because they fell under a different order and not because they got some sort of free pass.  In any event, the refills for such pencils were caught within this Order regardless.

As we could have suspected from reading the rather ominous Order above, it was not long before The Pencils (Manufacture and Supply) Directions, 1942 was issued.  In terms of key information on these pencils, this is it.

Most of the pieces of the puzzle are presented within this document, so we are going to spend a bit more time looking at it in detail.

The schedules, like a considerable amount of statutory instruments, are where the real applicable information can be found.  In this case, the single schedule is broken into two parts.

Part I sets out, in detail, the specification of the pencil.  Most of the rules outlined are immediately apparent when looking at a pencil example, however, the point of this post is to show where these design requirements came from.

I find Part I interesting because these days you’d not expect it to be law that pencils should be made from cedar (or home-grown timber).  In case you were wondering, Kenya Cedar is an English name for Juniperus procera which, according to Wikipedia, is a native species of Kenya.  Kenya during WWII was a British Colony.

Lets take a quick look at an example to tick off the Part 1 requirements:

Seems to tick the boxes – no polish, blind stamping (i.e. indented into the wood and not foil or painted lettering), maker and country of origin all present.

Part II gives us a breakdown of each ‘class’ of pencil allowed to be produced.  This is the only place I could find formal confirmation of the difference between a ‘Utility’ pencil and a ‘War Drawing’ pencils.  As you can see, the Utility pencils are a single grade, lower quality pencil for everyday use, whereas the ‘War Drawing’ is a higher quality pencil available in (limited) grades, for use in more professional settings.

Regardless of whether it is a War Drawing pencil or a Utility pencil, during the period that this Direction was in place, manufacturers were required to stamp their pencils with either label.

The Pencils Limited Utility below is pretty uncommon.  Yes, the rules stipulate that a Utility pencil can be round or hex, but 99 times out of 100 I come across round versions.  The stamping has missed a bit, but given the restrictions in place at the time, it’s not a surprise that this was sold anyway.

The Venus model below is much more ‘standard’ with the round barrel shape:

But hang on a second, why ‘Utility’?

Well, the Utility movement was significantly larger than pencils. The CC41 Utility logo was a British Board of Trade requirement that appeared on footwear, furniture, textiles, and clothing from 1941. CC41 designated that the item met the Government’s austerity regulations. It appears though that the word ‘Utility’ was quite enough for pencil stamping.

The Kirriemuir Free Press of 9 July 1942 sets out a nice explanation to the public on how the scheme would work.  Hugh Dalton, as President of the Board of Trade is a name that comes up again and again during this period.

Move on to PART 2