I don’t propose to tell you the history of the American Lead Pencil Co. in this post.  That would be too long, and actually, there are probably (read: definitely) better resources out there to do that.  I do however happen to have some older pencils from the American Lead Pencil Co. in my collection and I find this particular example quite interesting.

To set the scene, I have recently been reading about the Great Exhibition of 1851 which took place in Hyde Park inside the ‘Crystal Palace’.  I’ve found the whole concept utterly fascinating and plan on taking a walk around the V&A Museum again soon to take a look at some of the exhibits that are stored there.

By way of extremely quick history, the ‘Crystal Palace’ moved from Hyde Park to South London following the exhibition, and then burnt down in 1936.  I really urge you to go read about it if you don’t know too much about it.  I actually have a post in the works about a manufacturer who attended the Great Exhibition, so keep an eye out for that down the line.

The Great Exhibition paved the way for world expos on both sides of the Atlantic.  At first blush this particular box of pencils looks to have done the rounds at a number of these exhibitions, including the rather large Exposition Universelle of 1900 in Paris (another one to go look up if you don’t know too much about it). However, the Venus brand was only introduced by the American Lead Pencil Company in 1905, so it’s more likely they actually won the medal for another product and then just used it as proud advertising on other items such as these.

The pencil itself is simplistic, but the stamping is sharp and well done.  These pencils really give off a premium look despite being their basic appearance.  The core is round lead, which is to be expected given my guess of age (discussed below).  The pencil lacquer is particularly thick.

Records show they actually did attend and were Awarded Gold.  Good for them! (alongside the other 8,888 gold medals handed out during the Exhibition).  It appears that they were so pleased that they even included a embossed graphic of the Paris gold medal on the box.  You can search online and see plenty of copies of the actual medal.

I found a copy of a report on the exhibition online and snipped an excerpt from it.  I don’t think anyone will mind given the age of the document and that it was available on a free online resource.  The report is glowing for the American Lead Pencil Co:

The catalogue lists their ‘active branch house’ as 173-175 Lower Clapton Road, London. The company actually stayed there for quite some time, through a number of name changes as well.  I had a look on Google Maps and unfortunately there is a rather unexciting block of new build apartments where the branch used to be.  Pity, it called for a day trip.

I did however stumble across a great picture from the Hackney Archives showing the offices and works in a slightly later life (1965).  The below image is free to share under their licence however do a search for ‘Venus’ within the archive for some great photos including one where the factory narrowly avoided being bombed during the War.

The box itself is a bit tatty.  Once again it came to me in a pretty poor shape. I used a bit of simple glue to tidy it up and used an eraser to remove some of the grime and pencil marks that had build up over time.  Not fantastic results, but still a great example none the less.

On the side of the box refers to the patented ‘glass finish’.  They must have been particularly proud of this as it is mentioned many times within American Pencil Co. catalogues.

As promised, I happened to come across a reference to the ‘glass finish’ patent listed for 10 year usage from 15 April 1919, but with first usage from around 15 September 1891. 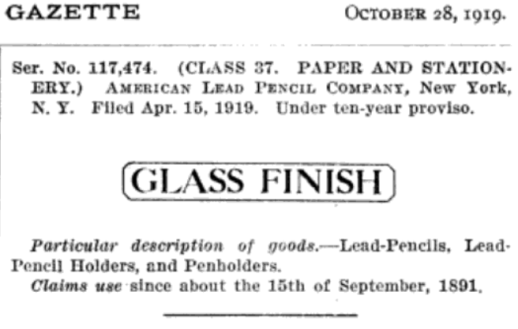 The American Lead Pencil Company Catalogue from 1914 does make reference to this pencil.  We can see that they actually changed the number with the grade, which I’ve seen on some vintage Japanese pencils, but does not seem to be too common these days.

The version in the 1914 catalogue has some changes to the stamping.  Firstly, they appear to have removed the model number and secondly they make a new reference to the patent (glass) finish on the barrel, instead on just the box like mine.   Therefore when looking to date this pencil, i’m going to place it somewhere between 1905 and 1913.

A rather interesting point of note is the fact that the pencils appear to be made of walnut.  This would seem an overly expensive wood to make pencils out of (although maybe it was less expensive then).  Further, its quite a hard wood as far as i’m aware and so there must have been easier woods to make pencils with around that time.

You certainly don’t see walnut pencils being made these days.  I do however have a North American Walnut pencil in my Bosco Woods set so we can compare them:

No real similarities on the barrel but the end showing the actual wood is a bit better.

I have a fondness for F grade pencils for every day use, but these pencils are unlikely to ever be sharpened.  I really enjoy having them in my collection and don’t think that I would gain any more enjoyment out of using them than I would simply by having them on display.  YMMV in that regard; if you can find them of course.