Staying with British made pencils for my second part of pencils for Calligraphy / lettering, we have the William Mitchell’s “Monk” pencil.

Similar to the Druid in naming, it appears that that both manufacturers were trying to evoke the same ideas with their marketing.

My box came a bit battered, however, with a little glue here and there, I managed to resurrect it into something a bit more presentable. The base of the box has a slight step halfway up which allows the lid to sit flush when closed. The inside of the lid features the same graphics as the outside. Perhaps they hoped you would display these on your desk?

The pencils are a standard carpenter size, unlike the Druid pencils  and come in a box of 12, pre-sharpened.

I don’t know an enormous amount about William Mitchell, but I have seen plenty of nibs and other art supplies with the name. The rear of the pencils I have says ‘Dryad Handicrafts P224’, a large seller of all sorts of craft goods and formed during WWI (by the excellently named Harry Hardy Peach).

The pencils also state ‘No. 228 soft’.  I wonder if they actually made any other grades.

There is no maker’s info on the pencils I have, however, I have seen other examples showing that they were made by Cumberland and a quick check of an old Cumberland catalogue confirmed my suspicions:

The core shape is quite standard for a carpenter pencil, nothing overly special to see here. The graphite has taken on a slight white look. I’ve seen this on other vintage pencils and it doesn’t appear to affect the usage (it’s only the top layer and wears away quickly anyway).

The core looks a little more ragged than the sharp lines of the Druid pencil; maybe tolerances weren’t quite as good? 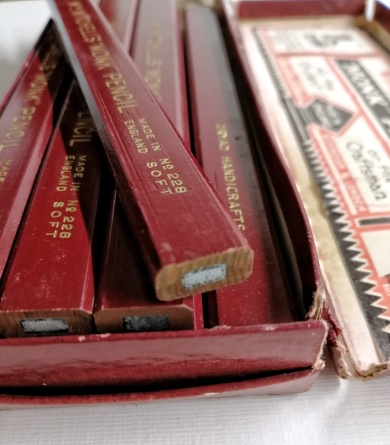 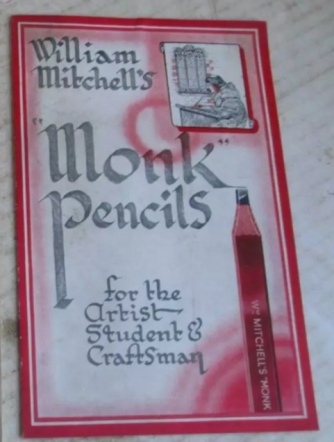 I tracked down the marketing material for these pencils on eBay but forgot to bid so missed out. The seller was kind enough to send me some pictures of the leaflet anyway. I really like the front cover design  and flyer (above).

The information booklet notes that the pencils are made of Red Cedar (instead of Incense Cedar), which is a hint towards their age. Supposedly the core is specifically selected after ‘exhaustive tests’. Time will tell in that regard if there is any special sauce going on here.

I think that the London address for British Pens Limited was bombed and destroyed in during the War around 1940, so the street no longer exists properly.  Therefore there’s a chance these pencils are roughly from the late 1930s.

However, if the London address referred to on my box is actually referring to 134 Old Street, London, then it is likely that these pencils were made in in the early 1960s.  You can just about see the British Pens Limited sign within the picture below from the Islington planning website taken in 1969: