This is part 1 of a series of ‘pencils for calligraphy’ posts. I have a few more lined up in draft, but over time, it may expand to 5 or 6 total. I’m sure there are others and so the series does not set out to present an exhaustive list. It’s really just pencils that i have in my collection that appear to have been designed with calligraphy in mind. Given that basically all the pencils featured in this series are vintage, you’ll also not just be able to get them in shops, so there’s that too.

I should say that the word ‘calligraphy’ might not be entirely accurate here and actually ‘lettering’ may be more appropriate. I’m not well versed in penmanship terminology and this title simply seemed like the easiest way for someone to get a rough idea of what the post is going to be about.

So first up in the series, we have the Royal Sovereign “Druid” pencil.

The Druid is an interesting pencil, not full carpenter pencil size, not standard chisel-point pencil size either, just somewhere in between. If carpenter pencil is to jumbo pencil, then the Druid would be to mini-jumbo. My box contains 12 un-sharpened pencils, however I do know that they also came as a box of 12 with factory sharpening.

The pencil is No 68. I have yet to see any logic whatsoever in Royal Sovereign numbering. I have different Royal Sovereign pencils marked with the same number, as well as pencils that should be sequential, but are not. If anyone has any idea how their system worked, i’d be keen to hear. For now, i’m going to assume that this number means absolutely nothing of relevance. 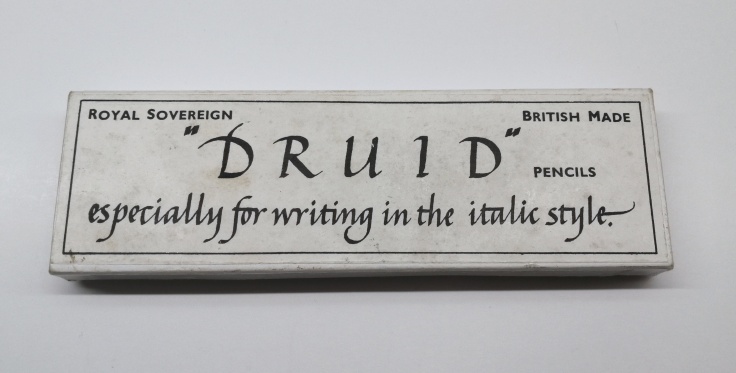 The box is quite plain in design on the top, but quite clearly sets out how you should be using these pencils. 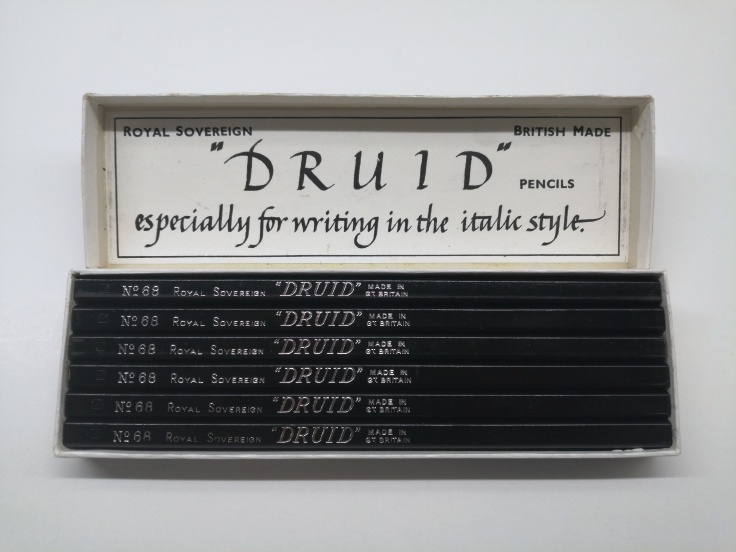 The lid is hinged and has the same design inside as out. Maybe they wanted you to keep the box open on display. The pencils are labelled with more of the same and are gloss black with silver lettering. 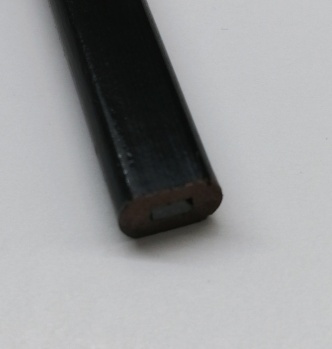 The core is rectangular with sharp corners.  When sharpening, i’d want to try and maintain these sharp edges, so careful knife sharpening will be required.

Trying to date pencils isn’t always an easy task. Usually I try and find advertising and date that. Changes in branding on the actual pencil can also give some clues. I did come across this advert online: 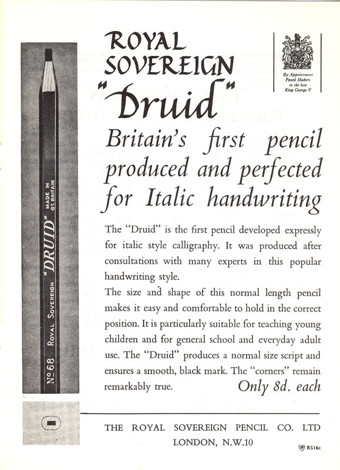 Given the address for Royal Sovereign and the reference to a penny as ‘d’, you have a date range of approx late 1929-1971.  Education Magazine Number 110 from 1957 notes that the Royal Sovereign Pencil Company Ltd produced these pencils owing to the recently increased interest in calligraphy.  Therefore, I think we could put these pencils roughly in late 50s, early 60s ballpark for age.  The inclusion of a model number and ‘Made in Gt Britain’ stamping is consistent with pencils made in the Welsh Royal Sovereign pencil factory, which was opened in 1947.