I have a soft spot for Wolff’s pencils, the pre-Royal Sovereign manufacturer who was based in London. One pencil from their lineup has always been of particular interest to me – The “J” Pencil.  My curiosity stemmed from the reading the following quotation from ‘British Commerce and Industry. The Post-War Transition. 1919-1934’, published in 1934 by Russell-Square Press:

High Court Judges and members of the Peerage carry the famous Wolff “J” pencil, which is supplied to the Law Courts and the House of Lords.

A fully transcribed version of this publication can be found on the wonderful ‘Graces Guide’ if you wanted to read the entire thing.

I have a personal interest in all things judiciary and so wanted to find out if this quote was in fact accurate, and if so, why the “J” pencil in particular?  Dates supplied would also be helpful.

I was lucky enough to get my box in excellent condition, no repairs needed, so they went straight on display. My box displays the Royal Warrant to the late King George V, so we know that this particular box post-dates his death in 1936.

The pencils were around for a decent period before this however, as this advert from September 1902 below shows.  It was the only direct reference to the “J” pencil I could hunt down.  I’m on the hunt for a catalogue drawing of this pencil, so if you have one, please let me know, i’d love to see it.

The lid is hinged and has the same advertising inside as out.  This seems to be a recurring theme with pencils of this age.  My set is complete and unused, ‘box fresh’ so to speak.  The pencils are 110mm end to end, so slightly stumpy compared to a ‘standard’ pencil.  They are also jumbo with thick core.  The lettering is lefty, as was the trend with pencils of this age.

It can be pretty tricky finding old catalogue images of Wolff’s products, however they did feature in other publications.  The advert in the Daily Telegraph from November 1911 below is a particular favourite of mine.

Punny, I see what you did there, Elias…

No mention of the “J” pencil within the advert, however, it does mention that Wolff were ‘makers to H.M. Government’, so we are on the right track with our investigations.  On a side note, there is no mention of the Royal Warrant at this stage either.

I did a quick look on the Gazette for references to the Royal Warrant around this time, and sure enough, in February 1911, months before the ‘wolf’ Wolff advert, they did indeed have the Royal Warrant.  It obviously just didn’t work with the design of that particular advert, however I still find it strange that they didn’t mention it.

Less than a year later in May 1912 however, and this Wolff’s advert from the Westminster Gazette has added the Royal Warrant as they now supply the King. George V in fact, the King from my box.

Anyway, lets get back on track.  The idea for this post was to try and see if the pencils were in fact used by the House of Lords and the High Court Judges.  I wasn’t the first person to wonder this, and in fact as early as March 1873, the question of pencils was being raised in the House of Commons.

Despite the strong advertising campaign by British manufacturers that British pencils were the best in the world, makers such as Hardtmuth and Faber (who had London offices) were making excellent quality pencils for a lesser price and so they were being widely used in the UK.

Two more interesting examples of this issue are shown below, both from November 1902.  This was a topic that actually gets quite heated over at least the next 10 years.  I can imagine once WWI broke out it was pretty swiftly put to bed. 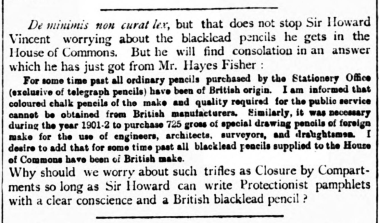 There is no doubt that Wolff was making various pencils for various departments and as early as 1849.  I also came across this advert from October 1884 for “shorts”.  The “J” pencil is indeed short, but 12 for a penny is far too cheap for this particular model.  Additionally, they also didn’t come in sets of 12. 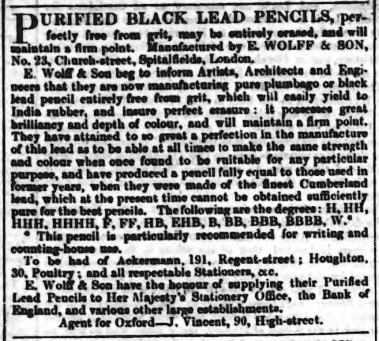 Modern pencil making has produced some particularly fine examples and we really can say that the quality has come on in leaps and bounds.  However, this is perhaps too general a statement.  Yes, the modern higher end pencil cores are terrific writers, however I can’t help but feel something got lost over time.

I wasn’t able to come to a complete conclusion to my initial question, however, as regularly appears to be the way, the journey is more important than the destination.