I’ve always enjoyed collecting F Chambers pencils and in fact some of those pencils probably deserve a post of their own.  Many of their pencils had strange model names such as the ‘WENO’ and “IONA” below.

I’m not sure where the names stemmed from, but according to an advertisement I’ve seen, the ‘WENO’ was for accountants.

[EDIT: I assumed the IONA was named after the Scottish Island, but this didn’t make sense to me for a Nottingham based pencil maker.  After a chat with another collector, we consider that as the monks of the Iona Abbey were famous for copying manuscripts such as the Book of Kells, the name actually makes a lot of sense!]

This post stems from an interesting advertisement I came across (I believe it was from 1921), which outlined a number of the sources of their pencil raw materials. There is also a mention of the British Empire Exhibition, which took place in Wembley in 1924 & 1925.

Like the Great Exhibition before it, a purpose built centre was erected and in this case included the famous (original) Wembley Stadium. 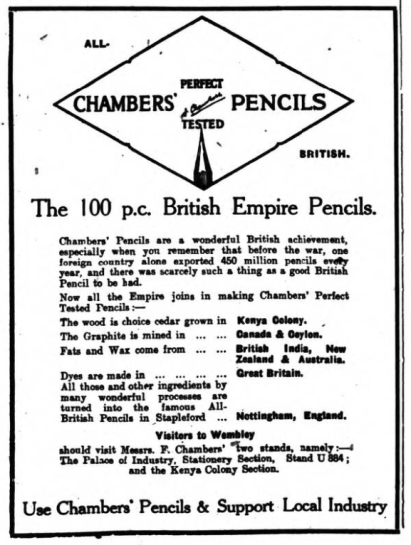 In my next post we will revisit the Wembley Exhibition and another exhibitor there, however, for now, lets stay with F Chambers.

F Chambers prided themselves on being 100% British.  It was lucky for them that at the time, the British Empire happened to cover a significant portion of the globe. Access to ‘British’ raw materials was therefore possible.  This has a bit of an ‘in on a technicality’ feel to it to me, but there you go.

F Chambers set up stall at the exhibition within the Kenya Colony Section.  I had a dig through my collection, and sure enough, they made sure we all knew where the wood came from on the pencils themselves.  This stamping changed to ‘Empire Cedar’ at a later stage (see below) and it makes me wonder if these particular pencils made around the same time as the exhibition. 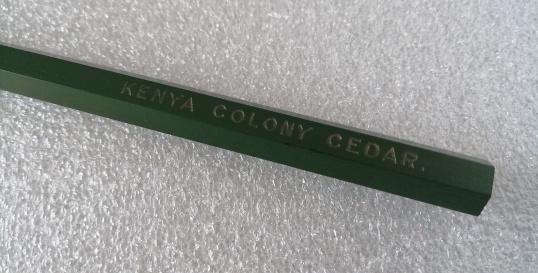 The reviews were good in the Empire Forestry Journal (Vol 4, No 2) of 1925 and they even made a point of highlighting Juniperus procea, which is also known as ‘African pencil cedar’ (A fact i only found out while researching for this post).

I’ve seen dozens and dozens of F Chambers adverts, and they always, without exception, have a strong “British made” push.  F Chambers existed during a time when the British pencil industry was severely struggling against the German and Austrian imported pencils.  All British makers therefore were running similar advertising campaigns.

The below example is a nice example of an older red cedar pencil.  F Chambers became F Chambers & Co Ltd in 1915 but appear to have dropped the ‘& Co Ltd’ from the stamping at some point further down the line.

In their advert at the top of this page, Chambers invited attendees to come visit their stall.  Well, as it happens, they got quite lucky and had not one, but two Royals of the day check them out.  As always, the papers were there to report. It wasn’t all pencil excitement for the George V however, as the non-pencil-related (and charmingly ‘shocking’) article on the right shows: 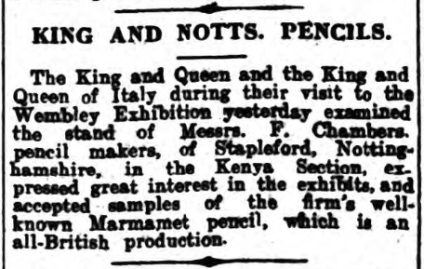 In July 1925, the papers were noting the record numbers of visitors at the exhibition.  Some of the attendees were school kids from LCC schools. 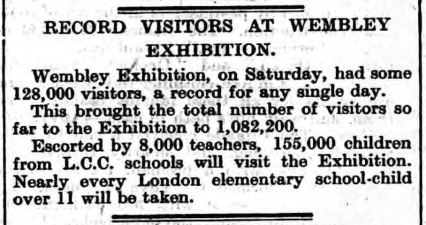 LCC refers to the London County Council.  I’ll let Wikipedia take over for a moment and provide a bit of background –

LCC was the principal local government body for the County of London throughout its existence from 1889 to 1965, and the first London-wide general municipal authority to be directly elected. It covered the area today known as Inner London and was replaced by the Greater London Council. The LCC was the largest, most significant and most ambitious English municipal authority of its day.

I’m sure Chambers would have been trying to appeal to this type of institution when they set up stall.  Unfortunately as far the LCC was concerned, it appears that they looked elsewhere:

F Chambers continued with their advertisements and in 1930 ran the following advert:

I have a couple of examples where the phrase “Empire Cedar” is stamped into the back of the pencil.  As i mentioned above, this appears to have been a change from the original “Kenya Colony Cedar”.  Kenyan independence didn’t occur until 1963, so i’m assuming this was still Kenyan wood.

Silken Graphite is an interesting term and one i’d seen before.  A bit of digging into the collection and I found the below example.