From what I can gather, Blaisdell’s involvement in London around the turn of the century was short and not particularly sweet; only a rather measly seven years – 18 October 1897 to 23 December 1904 to be exact.

What makes this an interesting proposition for collectors therefore is the short amount of time the London-marked pencils were produced. What makes this even more interesting for a pencil collector, who happens to be interested in history, is the manor with which Blaisdell came and then (swiftly) went.

If you like pencils, you’ll have come across American-made Blaisdell pencils, usually china markers, the Ben Franklin graphite pencil, and the rather nice Calculator 600, which has achieved a cult status due to one particular user. Other than the previous sentence, you won’t hear about any of those pencils again in this post. 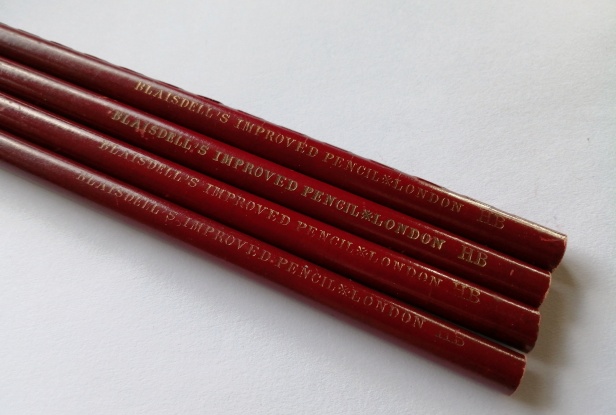 OK, lets start with the basics; there are three legal entities we need to be aware of for this post:

The other key player in this dramatis personae is a Mr E T Hooley, who shall play the part of the villain in this story; more on him in a bit. 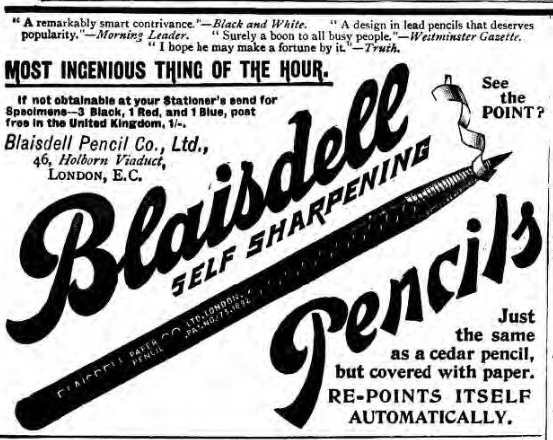 The advert above from 28 November 1896 refers to a ‘Blaisdell pencil Co., Ltd’. – From my research this appears to simply be shorthand for our first Company – ‘Blaisdell Paper Pencil Company Limited’, which, lets be fair, doesn’t readily roll off the tongue.

On a side note, clearly they couldn’t decide on a typeface for this advert and just landed on ‘all of them’.

This advert from 01 July 1897 is one of the last examples to have the old company naming on it.

At this early stage, Blaisdell Paper Pencil Company was a fledgling outfit, even in the USA. Enter Mr E T Hooley, financier and general corporate wheeler-dealer. Hooley decided that he would re-list the English company to boost the finances. To do this he had to do a number of things…

Firstly, he had to wind up the old company, which granted wasn’t actually particularity old to begin with. This was achieved easily enough by Special Resolution under the Companies Act 1862.

Company Law has always been very easy to access in the UK and so it wasn’t difficult to find the announcement in the Gazette from 3 December 1897:

So here is the first important date in our timeline – On 25 October 1897, Blaisdell Paper Pencil Company Limited was officially wound-up. 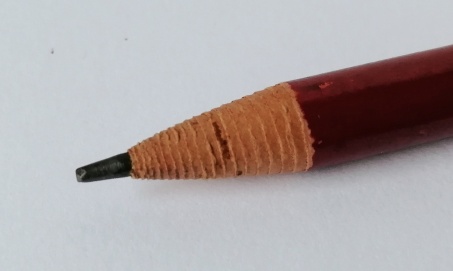 At the same time, a new company was being created – Blaisdell Pencils Limited. The listing below in the Globe from 15 October 1897 gives a snapshot of things to come. The rogue brackets may have been added by the publication in error.

The two next stages in the plan need to be run simultaneously; form the new company and at the same time find investors to cough up the funds to allow you to scale the business (or carry out whatever plan you may have in mind). To do this, you need to convince potential investors that the investment will actually be worthwhile.

Therefore, Blaisdell went on a pretty intensive marketing campaign, marketing not only the pencils, but the company itself.

As it turned out, the promotion was a terrific success and not only was the capital achieved, but rejection letters had to be sent to would-be investors who missed out. Pats on the back all round, Blaisdell. 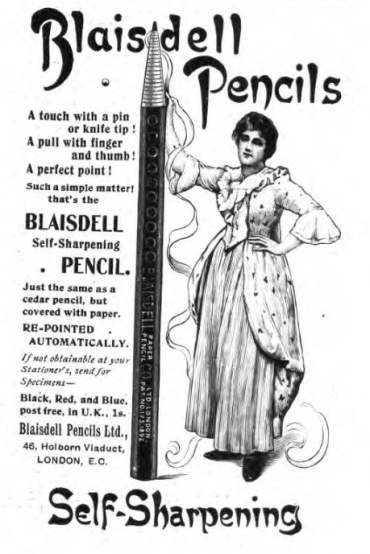 This advert from 11 December 1897 notes a number of variants of the pencil. The pencils appear to also have the patent information printed on the barrel, however, I have not seen one like this in the flesh.

So far I have been able to find examples in HB grade, Red and Green. This appears to tie in more accurately with the below advert from 5 February 1898 which notes “all colours” and “all grades”. You will also note that the patent information has been removed from the barrel, although this looks more like a mock-up as the actual pencils were a bit smarter looking. 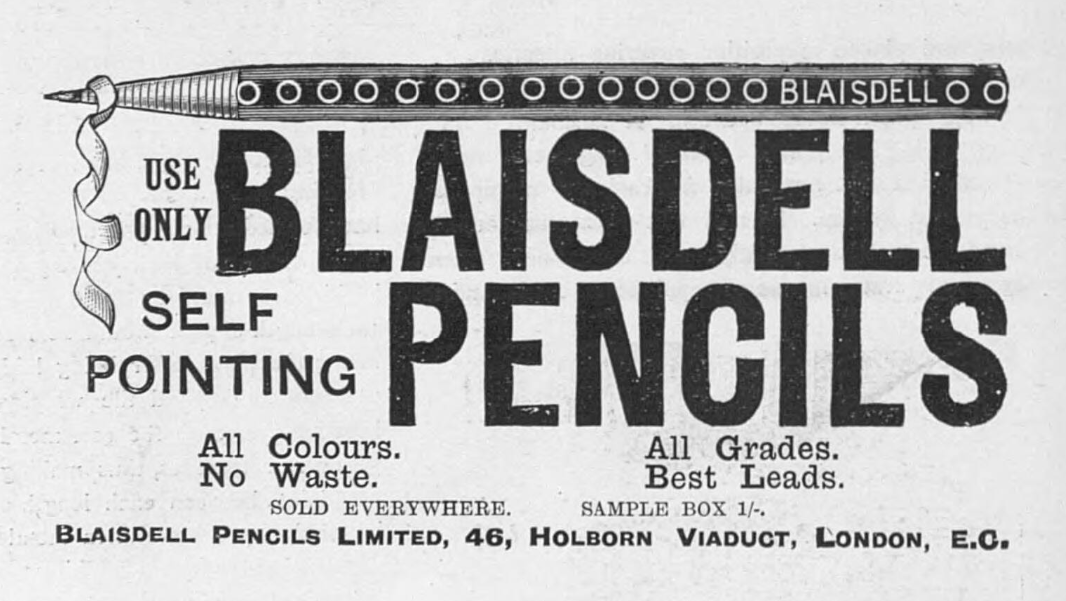 Here’s where things go a bit south. Whilst the paper-wrapped pencils were really quite a good idea, the problem was the valuation of the company. To understand what went wrong, we have to understand Mr E T Hooley. Over to Wikipedia for the penny-drop:

Ernest Terah Hooley (5 February 1859 – 11 February 1947) was an English financial fraudster. He achieved wealth and fame by buying promising companies and reselling them to the public at inflated prices, but a prosecution exposed his deceitful practices. He was made bankrupt four times and served two prison terms.

As part of the liquidation process, our third company was created – Blaisdell Pencils (1901) Limited. The advert below is from 15 February 1902. Note the address change, which is just around the corner from Blaisdell’s Holborn Viaduct address. I’m assuming that to reduce costs, they moved into more of a side-street than a larger thoroughfare.

Once again however, it was not meant to be for Blaisdell. In the Western Gazette of 4 August 1903, the directors of Blaisdell Pencils (1901) Limited expressed their “regret that notwithstanding all efforts on their part to promote efficiency and economy in manufacture and to increase the sale of the company’s pencils the results of the past trading have proved unsatisfactory”.

On 13 August 1903, the Manchester Courier ran a small article on the affair: 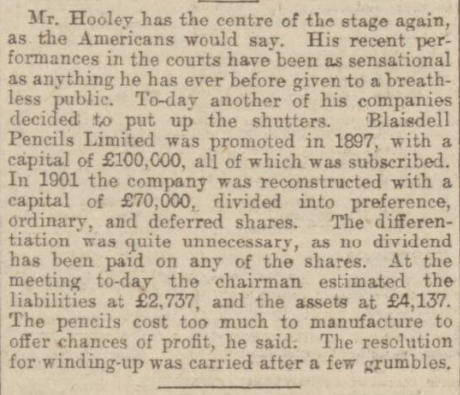 And just like that, on 23 December 1904, our third company Blaisdell Pencils (1901) Limited was officially wound-up and with it went Blaisdell’s attempts to settle in London.

And that, as they say, is that.