[This post was updated on 11 October 2020 to include new images and information.  I originally wrote the post after finding a single pencil, however, have since come across a box with a couple of different examples.]

I’ve wanted to write this post for a while, but it was proving quite difficult because the pencils in question are extremely difficult to track down. Further, information on these pencils isn’t exactly readily available.

The pencils in question are the “Bank of England” model made by E. Wolff & Sons (I know, I know, another Wolff article; trust me, there will be more!).

When I finally got my hands on some, I knew it would be worth me digging out some background information. There really isn’t much written about these pencils online so I thought it would be good to have a reference point somewhere; who knows, maybe it’ll help someone else trying to find out about this hard to find model.

From what I can gather, Wolff made this pencil to be supplied as the exclusive pencil of the Bank of England and then subsequently chose to make them available to the general public for sale. The fact that they were supposedly the only pencil used by such a respected institution was all the advertising blurb required.

My box above actually came with a couple of variations of the pencil.  The pencils are stored in three rows of four, instead of the normal two rows of six.  The pencils fit snuggly and don’t rattle around.

Most have the standard left to right ‘Bank of England Pencil.  E. Wolff & Son Makers, London’, however some have a nice filigree type swirl in between the model and maker name.  They all have ‘British Make’ on the opposite side.

Advertisements for this pencil are few and far between, but I was able to come across a few examples. ‘Wyman’s Dictionary of Stationery and Compendium of Useful Information’ from 1875 gives the best description of the pencil I could find:

The pencil is a simple plain cedar model but it does have a good deep stamping along the full length of the barrel (note the swirl in the example below between the model and maker names).

All the variations I have have a round core, which I would normally date ‘post-1900’. However, the various advertisements I have read all date around 1850 to 1890 for this particular model and I know that Wolff was one of the first makers to experiment with ground/compressed graphite cores, so this could actually have been produced pre-1900 despite the round core.  I think however its more likely these are 1920s and then the slightly earlier models are probably early 1910s.

Most of the examples I have are cleaned to a nice polish, however, a couple, such as the example below, are more matte and look like bare wood.  If I had to guess, I would think that the bare wood versions are slightly older than the polished.  The polished versions do not look like they have a lacquer over them, just a high polish.

There is a lot of interesting information in the following article from the Leeds Times of June 1887, so I’ve kept it whole:

Firstly, the article notes that the pencil has been in use for upwards of 60 years. Given the publication date, it would suggest that the Bank of England pencil (in one form or another) was being made as early as the 1820s – this seems a little early to me, but quite amazing if accurate.

Lastly, this is the first time I have seen reference to an ‘out degree’. I believe that this means that it was produced to the specifications of the customer rather than following a particular grade on the standard HB grade scale. This would explain why there is no grade stamping on the pencil.

So what is the core like? The pencil was advertised as being ‘rather softer than HB’ making it easy to rub out (apologies for the image quality above, its the best I could find with this reference). My example is not sharpened and at this point in time I have no intentions to sharpen mine to test.

Most of the advertisements for this pencil really lean on the fact that it can be rubbed out easily. I’ve seen similar boasts within advertisements for ‘account book’ pencils, so it was obviously an important property when dealing with numbers and calculations.

I’ve don’t really know why this model is hard to come by.  It seems to have been marketed somewhere in between their ‘Royal Sovereign’ Model and their ‘Spanish Graphite’ model, so maybe it just wasn’t that popular in the end. 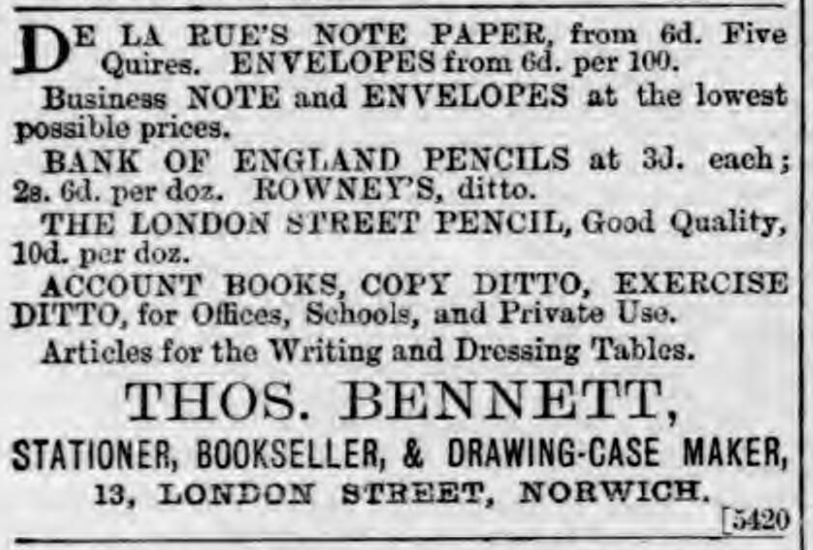 Resources on this pencil may be limited, however, the Bank of England pencil does make a small cameo in ‘The Victorian House’, a really excellent book by Judith Flanders that I can wholeheartedly recommend.

I was leafing through my copy recently and came across the following passage which described some of the toys children at the time owned.  I do wonder why the children opted for a Bank of England model.  I can only guess that this may be down to it being slightly cheaper than some of the other models which may have been reserved for adults.

The advertisement in Lloyd’s List on Friday 19 January 1883 still rings true today.  Too often fancy looking pencils turn out to be trash under the hood.

During my research for this post I reached out the Bank of England Museum for some help.  They were kind enough to dig into their archives and came across the following box of Wolff’s ‘Royal Sovereign’ Pencils – a particularly nice box example at that.

The Bank has a good digital archive of interesting digitised documents which can be accessed here.  Well worth a look around if you are interested in that kind of thing.  The photos below are credited to the Museum with my thanks.

Interestingly, the following Blaisdell advertisement in the Dundee Evening Telegraph from October 1897 suggests that their pencils were used by the Bank in preference to other brands.

Blasidell hadn’t been operating in the UK for long in 1897, so I’d be surprised if they really were the preference, particularly when there was a pencil that had been produced exclusively for the Bank for decades at this point. 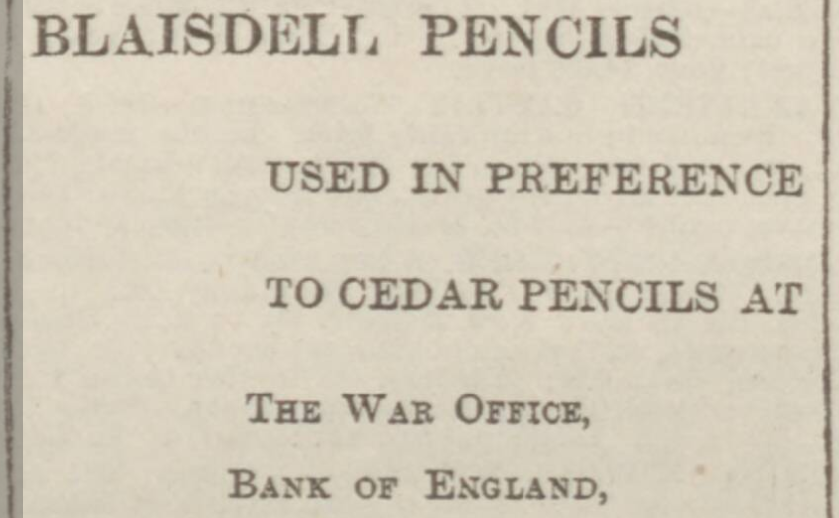 My post on Blaisdell’s dealings in the UK is a good place to start if you want to know more about them, but one thing I have noticed is that quite a number of Blaidell adverts were big and bold (and repetitive) and not always 100% accurate.  Thats a polite way of me saying I believe the advert to be nonsense.  There is every chance they were used for particular tasks (particularly the coloured versions) but that’s not exactly what Blaisdell are suggesting here. 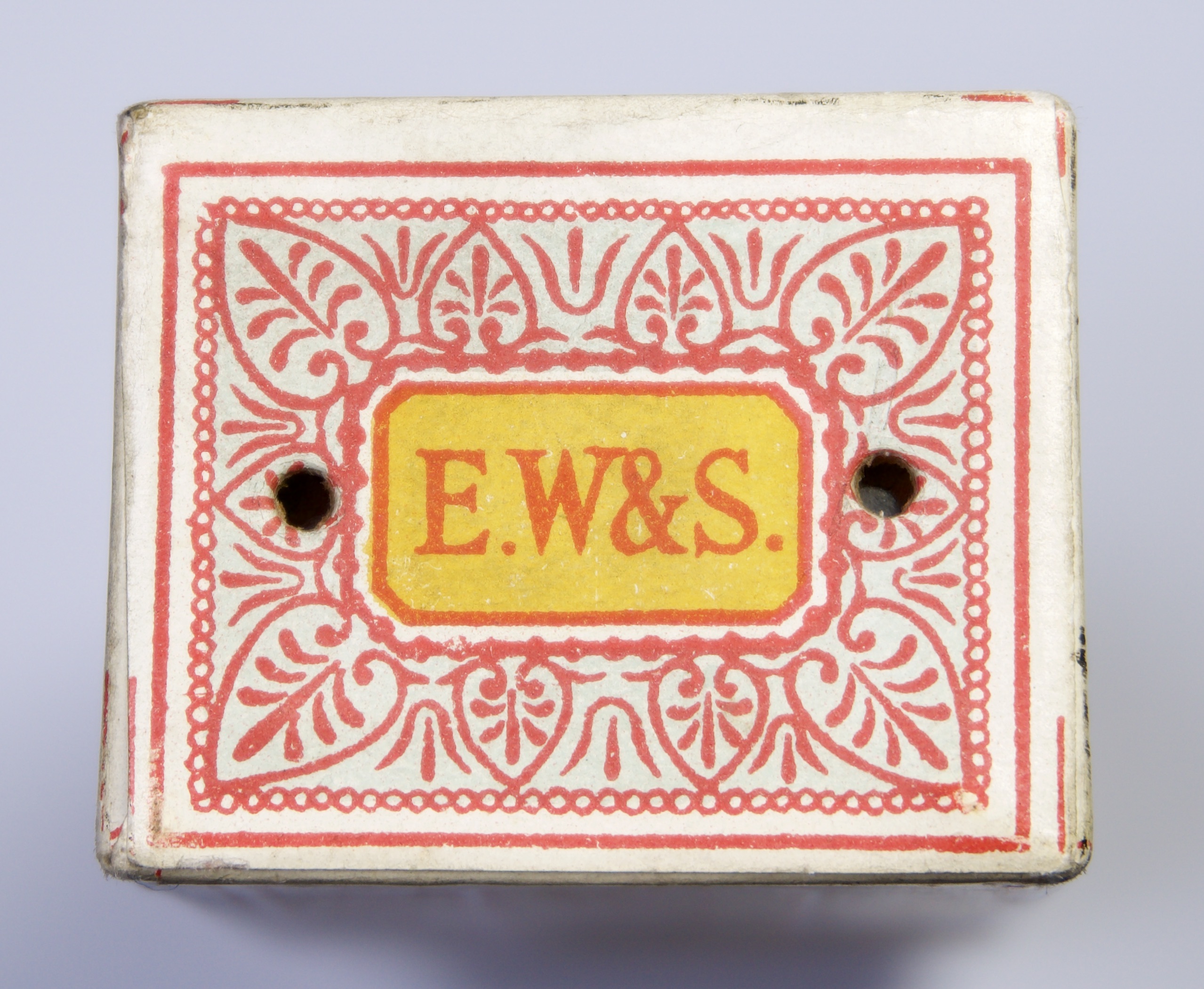 Finally, the box has two small holes on each end and I have absolutely no idea what these would have been for.  If you have any idea, I’d love to hear it!  And of course, it goes without saying that if you have any other varieties of this pencil, I’d be keen to talk trades.