When I think of pencil graphite a few key historic sources come to mind: Borrowdale in England or the Alibert Mine in Siberia (named after Jean-Pierre Alibert for those that don’t already know) being two good examples. One other source that usually makes the list is Wolff’s “Spanish Graphite”, which I had come across on a number of pencils, but was unfamiliar with the actual mine.

It got me thinking, where did this graphite come from in Spain, who else other than Wolff used it, how pure was it when made into cores, is it still being mined? Either way, Irish Builder Magazine were suitably impressed when they first came out: 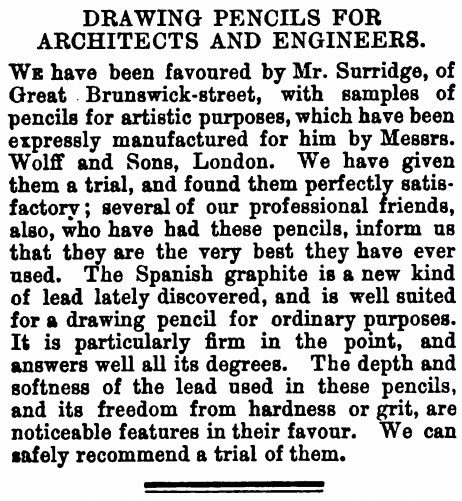 Firstly, why graphite from Spain? Well looking at the explanation given in Mining Magazine – Volume 8 from 1857 below, the reasoning is pretty obvious – it was cheap, but high quality, once processed.

During 1870/1871, Wolff imported a parcel of graphite from Spain. It was found to be very suitable for the manufacture of lead pencils and so they called the pencils produced “Spanish Graphite” pencils, as they were simply pencils, made of graphite, imported from Spain (makes sense right).

The graphite cores used were not produced in the sense of cutting strips (as had been the way with the early Cumberland lead), but were produced from powdered graphite, prepared in the way which was, at this point in time, usual in lead pencil manufacture (a process which, by the way, Wolff helped to pioneer).

The early advertisement from the Scholastic Register in April 1870 above illustrates the first models of the Spanish Graphite line.  As expected they had square cores but the lettering in these ‘first run’ pencils goes from the right to left on the barrel.

These particular models are likely to be the only versions using actual graphite from Spain, because after importing this initial parcel of graphite, E Wolff & Sons were not able to get any more Spanish graphite. Despite this, they continued to call their pencils “Spanish Graphite”, when in fact the components making up the pencil did not, in any part, come from Spain.

Instead, they used suitably blended materials obtained from elsewhere, using a secret recipe prepared in the UK. The wood came from Florida in case you were wondering.

The pencils came in brown polished cedar and in a selection of grades, as shown in the chart below. Whilst Wolff don’t appear to make a big deal about the colour in their adverts other than mention it, it turns out it was a big deal to them.  You will also note that the lettering has now changed from left to right.

Wolff elected to refer to this finish as brown polished cedar; this will feature again later.

The first batch of 12 I have in my collection is what I consider to be a crossover set. The paper wrapper makes reference to the Royal Sovereign Pencil Co. Ltd, however, the pencils themselves are yet to have any Royal Sovereign branding. They also still refer to ‘E. Wolff and Son’s…’ which was later shortened to simply ‘Wolff’s…’.

Lastly and maybe most importantly, they have square cores which Wolff stopped making around 1900. My guess is that these particular pencils are considerably older than the paper wrapper and were probably pre-merger older stock being used up post-merger.

By 1887, Wolff was starting to make more of a deal about the colour, as the advert below shows. It is now referred to as a ‘distinguishing feature’. Remember, the actual Spanish graphite parcel imported by Wolff was completely used up at this point, but it sounds like something was going on to me…

Sure enough, in 1883, a German firm had started supplying pencils stamped “Spanish Graphite”, “Spanish Cedar” and “Selected Graphite” in gold lettering to the English market. In fact, three other makers had also done the same between that year and 1900. Each of these firms had also chosen a particular shade of brown polish, which, understandably, rubbed Wolff up the wrong way. Accordingly, Wolff took the other manufacturers to court to try and restrict the sale of their pencils.

According to arguments put forward by Wolff’s counsel, there was no ‘Spanish Cedar’ known as an article of commerce and ‘Spanish Polish’ was not known as a trade term, but both the expressions aforesaid were invented, adopted, and used by Nopitsch for the sole purpose of connecting their-said pencils with Wolff’s and causing them to be believed to be Wolff’s ‘Spanish Graphite’ pencils.

I don’t own any pencils from the German makers, however, I was able to find examples of the lettering within judgment from the inevitable court case:

I came across a Joseph Egerton & Co. Ltd pencil utilising the ‘Spanish Graphite’ term and the brown ‘Spanish Polish’ in my collection:

According to the judgment, between 1874 and 1884 E. Wolff & Sons had supplied their pencils to a trader whose name was put on in the place of their own in front of the words “Spanish Graphite,” not only on the pencils but also on small show-cases; but this practice had been subsequently stopped.

I had considered that maybe these Egerton pencils were what was being referred to and perhaps Wolff had manufactured them. However, Egerton worked out of the Royal Ensign Pencil Works in Manchester and I have my suspicions that this pencil is not as old as 1884 (it does look like it fits the bill mind, so you never know).

I also recently came across the advert above in the Belfast Telegraph dated 20 August 1883.  Bairds didn’t have a factory to make pencils despite what their advert seems to suggest.  The date lines up here, so it is possible Wolff was supplying Bairds, or they were buying in from one of the German manufacturers.

The ‘second’ pencils referred to in the advertisement below were produced as cheaper ‘penny pencils’. Slightly inferior, but half the price. This was a fairly common practice amongst pencil makers and you can find many examples of ‘penny pencils’ throughout the European and US pencil markets of this time.

According to the Nopitsch judgment, the penny pencils were stamped in silver lettering instead of gold and said ‘Penny’ before ‘Spanish Graphite’ on the barrel.

Unfortunately for Wolff, they lost not only the trial, but also lost on appeal. E Wolff & Sons therefore were not entitled to an injunction to restrain the manufacture or sale of any of the pencils complained of.

The outcome made the Morning Post – Wednesday 28 November 1900. The article reports the pencils as being ‘dark green’, which is clearly an inaccuracy in the reporting:

Luckily, this didn’t stop Wolff making Spanish Graphite pencils and I’ve managed to gather up a selection of different versions over the years.

The top HB does not include and Royal Sovereign branding on the reverse, whereas the bottom two pencils do. The paint is a slightly different colour (which is slightly ironic). I would date the top pencil as ever so slightly earlier than the bottom two. Both examples are later round core models.

Small Spanish Graphite combination pencil with Royal Sovereign point protector – the extender is similar to the ‘universal’ model in the image from Silber and Fleming’s Illustrated Catalogue from 1880:

I’ve yet to come across any of the boxes these shorter Spanish Graphite pencils came in like the 4 pack above.

‘Tough’ logo Wolff’s Spanish Graphite. This model does not have any Royal Sovereign branding on the reverse, indicating that it may have been ‘pre-merger’ (although this shortening of the name as a sign of pre or post merger is not always consistent).

Wolff continued to make Spanish Graphite pencils even during their period in Wales from the 1940’s on. This factory was a bit of a joint venture with Staedtler and eventually all pencils being produced were Staedtler branded only (and a topic for another post).

Let me know if you have any versions I don’t have, I’m always open for trades for this kind of thing.