All advertisements I have come across for this model date from the 1860s, so let’s go with around 1868 or 1869 for the pencils in my collection.

The ‘Compressed Lead’ pencils, like most older British pencils, are round barrel, square core.  In the 19t century, Wolff preferred to keep the completely natural finish for their flagship products, therefore, because these sit just below the ‘Pure Cumberland Lead’ pencils, they have a nice polish finish; something I actually prefer.

As with most older Wolff pencils, we have the text on the right hand side of the pencil, or right-to-left as I refer to it (although I’m aware this isn’t exactly accurate as it’s not written backwards so to speak).  The pencils feature the compressed lead development, which keeps popping up, but I’m saving for a proper discussion when we look at the ‘Pure Cumberland Lead’ pencils.

In a nutshell though, Wolff and Brockedon both came up with a remarkably similar process of making leads from ground graphite and ended up in a fierce court battle that spilled into their marketing.

I am assuming that these pencils are not using lead sourced from Keswick or they would advertise it on the pencil.  As well as using Cumberland sourced graphite, Wolff were also sourcing graphite from other countries (such as Spain for their Spanish Graphite pencils), and whilst I can’t confirm at this stage, I have my suspicions that the ‘Compressed Lead’ pencils probably contain graphite from Bavaria or Ceylon (as it was then).  This allowed Wolff to charge half the price as their ‘Pure Cumberland Lead’ pencils despite a more intricate barrel finish, as we can see from the advert from The Windsor and Eton Express from 21 March 1868:

The quality of the stamping always impresses me on some of these older models, you could even say it puts most modern makers to shame.  Despite being (roughly) a rather whopping 153 years old, they look like they just came out of the factory.  I was lucky enough to acquire them from someone who had them stored away for a long time, so you may not come across them in this good a shape if you do happen to find them. 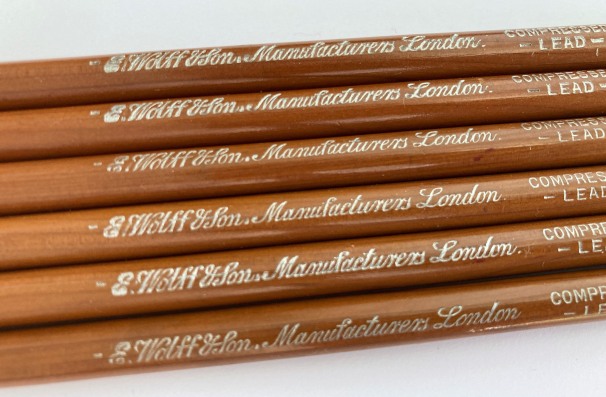 The Illustrated National Pronouncing Dictionary of the English Language 1869 notes that Wolff are working out of the Great Queen St address at their Steam Pencil Works.  In the 1850s Wolff where still operating out of their 22 & 23 Church Street, Spitalfields address, so I’d hazard a guess that Wolff investing in some elements of automation in their larger factory allowed for more models of pencil, such as this one.

My examples come in the BB grade which is nice to see.  Normally I’ve found that the harder grades tend to survive the passage of time more than the softer grades.  I’ve said it before but I’ll say it again, BB, BBB, BBBB, etc. is far nicer stamping that 2B, 3B, 4B and modern makers should go back to this. 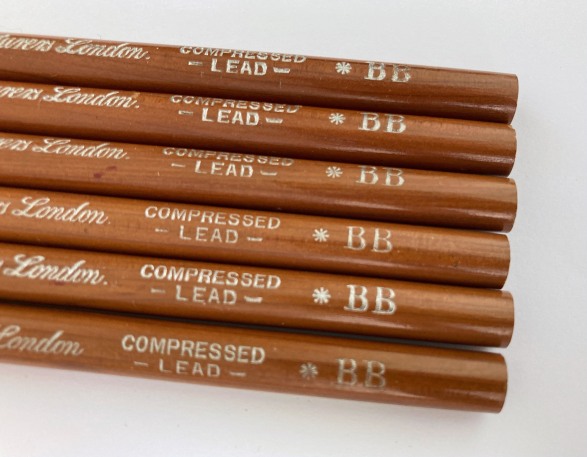 The Merchant shippers of London from 1868 notes that Wolff won two medals at the 1862 International Exhibition in London.  I believe these medals were for the Creta Laevis pencils and the ‘Pure Cumberland Lead’ pencils, both of which will feature on this blog shortly.  This advert was published around the same time as the ‘Compressed Lead’ pencils were being made, so I think we can just assume they fell into the category of ‘superior black lead pencils, of every description‘. 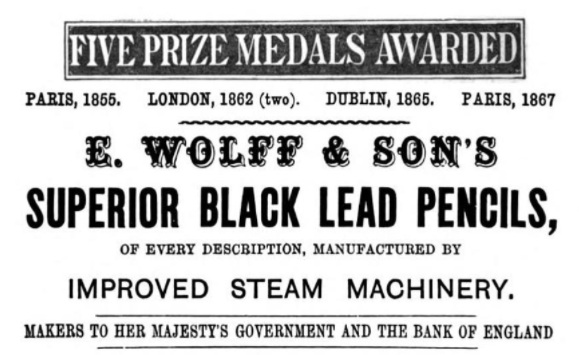