If you read this blog on a regular basis you might be thinking that this post title looks remarkably similar to another post I wrote – B. S. Cohen’s Compressed Cumberland Lead pencils. And you’d be right.  I recommend that if you haven’t read that post, you read it first before carrying on with this post.

This post is a continuation in the history of a particular pencil and so it makes sense to start at the beginning with the Cohen model.

So where to start with Arthur Johnson?  Well, there are two different things to look at here, the first being the person and the second being the company, ‘Arthur Johnson Limited’.  This post isn’t a history of Arthur Johnson Ltd, but I’ll touch on it a tiny bit, just by way of background.

However, firstly, lets start with the legend that was B. S. Cohen, sailing off into the sunset in November 1890 aged 74:

According to the National Archives, Arthur Johnson Ltd (Company No: 79741) was incorporated in 1904. This suggests that after Cohen’s death on 3 December 1890, the business continued with the board of directors, on which Arthur Johnson sat, running matters.

It didn’t run for an enormous time however, and alongside E. Wolff & Son, joined forces to create the Royal Sovereign Pencil Company Ltd in 1920.  Taking into consideration that WWI took place for a small chunk of that 1904-1920 period, there aren’t really very many ‘models’ produced by Arthur Johnson Limited. 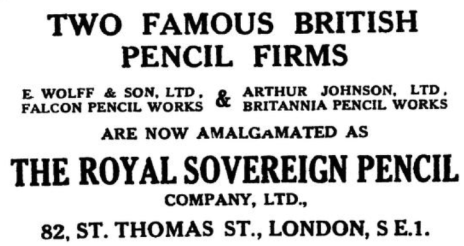 Pencils stating the ‘Ltd’ company name pre-date the formation of the Royal Sovereign Pencil Co Ltd, whereas, pencils that state ‘Arthur Johnson’s’ (and usually have a blatant reference to Royal Sovereign anywhere else on the pencil) were manufactured by Royal Sovereign after their formation.

This was quite common for Royal Sovereign, as they retained well known branding on numerous Wolff and Arthur Johnson models as the below 1921 advertisement confirms:

When we look at the Gazette for 19 November 1920, we can see that Angelo Wolff and Arthur Johnson wound up their respective companies on the same day: 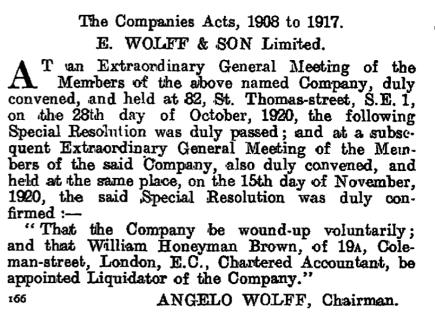 Winding up Arthur Johnson Limited wasn’t instantaneous and took liquidators well in 1922 to sell off any of the assets that didn’t transfer across to Royal Sovereign.

The law requires that the liquidator be a qualified and licensed insolvency practitioner. Insolvency practitioners (in the UK anyway) have a duty of care to act in good faith, and to maximise the return for company creditors. The liquidators principal role therefore is to realise the company’s assets and distribute the proceeds to creditors. Therefore we can be pretty sure that no pencils were still being manufactured at this point in time.

Starting to look at the pencils, the first thing to note is that it’s interesting that when Arthur Johnson ‘inherited’ the model he elected to add a model number, ‘360’, to the pencil.  Seems somewhat pointless to me given that the pencil had been in production for a long time at this stage and really was pretty well known and regarded. I’ve never seen an Arthur Johnson catalogue but I somewhat doubt he had 360 models!

You can see the ‘filigree’ style pattern starting at the top of the barrel.  This pattern also features at the end of the barrel, as you can see in other pictures in this post.  I’m wondering if there is a chance that these the pencils were being made using slightly longer slats and then cut in half.  Of course, it could just be that Arthur Johnson preferred to have the entire length of the pencil stamped.

When we look at the end of the pencil, we can see the classic square core. This is an interesting thing to stop and consider for a moment.  We normally think that post-1900 pencils are usually round core, however, if these were made post the incorporation of the Ltd company, then this would mean that square core pencils were still being made as late as 1904.

The other option is that Arthur Johnson had a lot of square ‘Compressed Cumberland Lead’ cores still in stock and simply used them up until they were done.  If I had to hazard a guess, I’d go with the latter.

Regardless of whatever option is correct, I don’t think Arthur Johnson made these pencils for much more than a year or so and they were probably one of the first, if not the first pencils with the Arthur Johnson Ltd stamping after the switch from Cohen.

Looking at the pencil build, it doesn’t quite look like a ‘trough and lid’ construction, and instead looks more like a square core fixed 50/50 between two slats.  This is also interesting as it looks like we have an older process for the core and a slightly more modern process for the slats.

We can see that these versions retained the ‘Trade Mark’ stamping just like their predecessor model, however, the stamping doesn’t appear quite as deep or as crisp to me.

Arthur Johnson even retained the “trade Mark’ pencil stamp in their advertising, just like Cohen, as this advert from the Almanack for 1918 shows:

I find it amazing that they continued to advertise the fact that Cohen won a medal at the 1862 International Exhibition for perhaps 40 years.  It really shows how much stock people put on the Exhibition when it took place.

The advertisement from the Yorkshire Post (Wednesday 6 October 1920) quite entertaining.  We know that Royal Sovereign elected to retain a lot of Wolff and Johnson models (and keep the Wolff and Johnson same on the other side of the barrel), but when we look at the list of ‘famous’ pencils in the advert, the Alexandra and the Hex Coloured are basically the only Johnson pencils on the list (and the Alexandra was a Cohen in any event).

When you look at the ends of the pencil, you can see that ‘London’ just cuts off.  I wonder If this is further evidence to suggest that the pencil slats were double in length (or more) and they were just cut after stamping

All in all a very nice example of an old pencil.  Its really nice having them beside the original Cohen versions in my collection.